I was prepared for most things on this trip: that the weather would probably be bad; that there would be a lot of hills; that I would end up eating a lot of bread, despite promising myself I wouldn’t. All those things have turned out to be true, and it’s been fine – although my bathroom scales may tell me another story when I return. What I honestly wasn’t prepared for was how much Spanish I’d be speaking. Bear with me here; I know that statement sounds odd – I DO remember what country I’m in. I can speak (terrible, error-strewn, mainly present tense) Spanish, and have a good line in check-in and food/booze purchasing phrases. But on my other four Camino trips, full of people from across the world, English has always ended up being the dominant language. Not this time. This time I’ve met and walked with lots of lovely, and very (very) patient Spaniards who have had their poor ears mangled by my mis-conjugations. As I explained to a new Camino friend yesterday, an Italian woman who speaks five languages fluently, my confidence to speak far outweighs my ability to do so… an issue that goes back many years, and in all honesty doesn’t just apply to my lack of mastery of an Iberian language…

Anyway, all the listening and speaking – and thinking about listening and speaking – I’ve been doing led me to take refuge in a hotel room of my very own this afternoon. A little mini-break from my holiday, chilling in the small town of A Fonsagrada, where legend has it St James turned the local fountain’s water into milk (hence the name of the town), and where rather more reliable historical sources indicate there was a Roman presence a mere 17 centuries ago. It’s also in Galicia (the beating culinary heart of Spain) – I left Asturias behind after two rainy hours of walking this morning. And I’m only exaggerating slightly when I say that the rain stopped / the sun came out as I crossed the frontier between the two provinces. The rain DID stop shortly before I crossed, having peed it down for several hours. And the sun did ‘sort of’ come out. For a bit. In places. But it was chilly, and the lure of my warm hotel room has been strong this afternoon: I’ve had my 30 euros worth, that’s for sure. Last of the big spenders, that’s me! 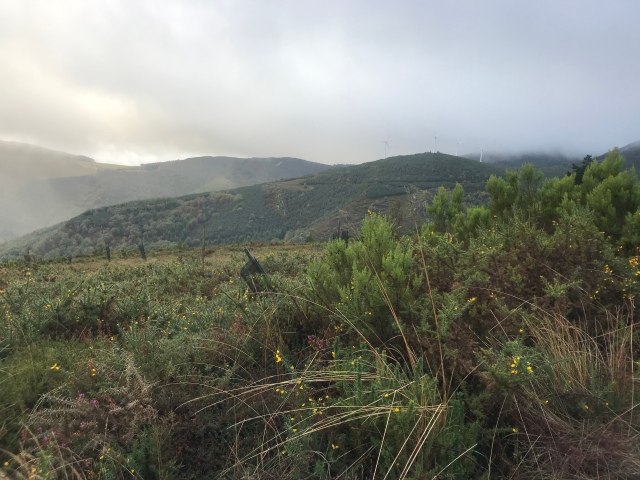