Two Days in the Lakes

Where: The Lake District 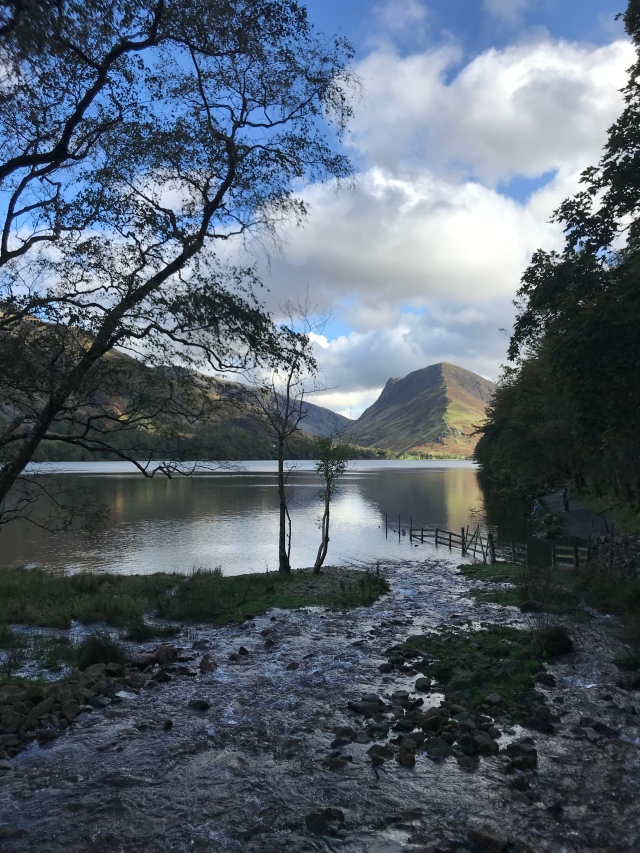 I haven’t gone north to go walking since I completed the Dales Way with a group of friends last August (never did get around to writing about that one, but I recommend it). Head down in a book, I hadn’t looked out of the train window much in the last hour, but approaching Oxenholme I did – and was rewarded with the sight of one of the loveliest landscapes in England. 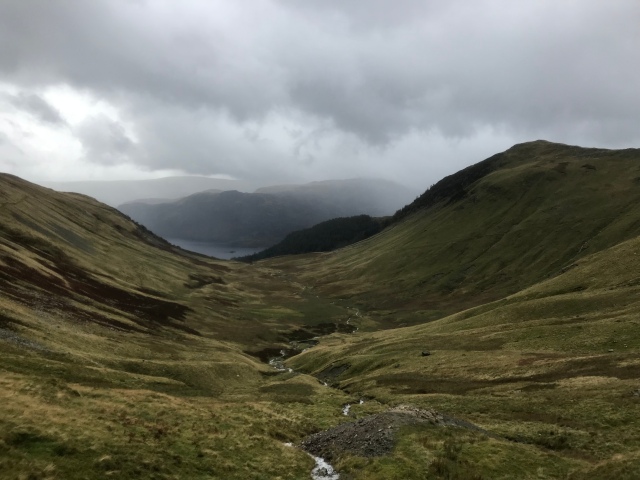 It never seems right to describe the beautiful beasts that loom above the area’s Ice Age bequeathed valleys as hills. They don’t quite meet the height requirement to be mountains, but ‘hill’ feels woefully inadequate. Whatever you call them, that was where I was headed: Peter, one of a number of good friends I’ve made while long distance walking (we met on Day 1 of Offas Dyke back in May 2014) was determined to get me up doing some fell walking. It’s one thing, he reasoned, for me to walk 20-odd miles a day on trails, another thing entirely to do battle with the elements and the challenges that more wild country can throw at you. And I’ll happily admit, right now, that he out-walked me, despite being born some three decades before I made my entrance into the world. 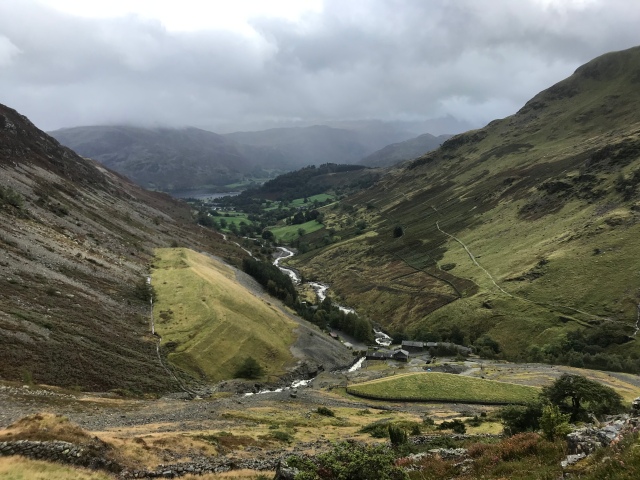 On the first of our two days, the wet weather led us to stay close to Penrith, the town on the edge of the National Park where Peter and his family live. Heading for Ullswater, we parked up near Aira Force (Force seems to be the traditional name for waterfalls in the area) and walked up to Brown Hills and Glencoyne, down towards the pub in Glenridding via one of the area’s many disused lead ore mines, and then along the lake to the car. We were out for about four hours in all, largely walking in the wet, rain gear fully deployed, with the fells largely sodden underfoot from the recent heavy rainfalls. Visibility was patchy in places, so it wasn’t a day for heading too high, but the valley at Glencoyne was a sight to behold, whatever the weather. 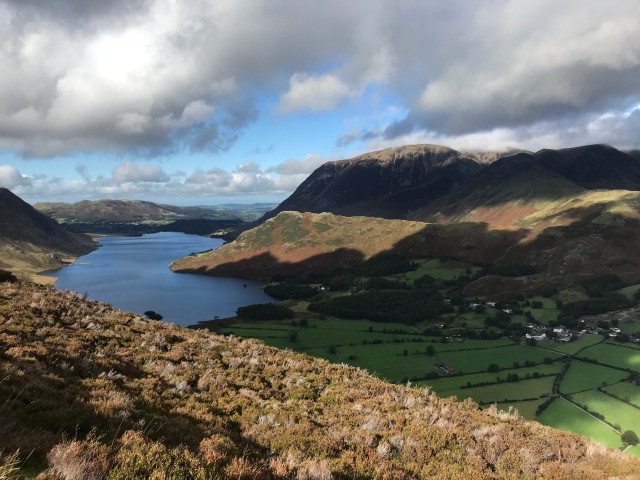 Day two was much better weather wise, so we ventured out towards the west of the Lakes to Buttermere, with a pretty spectacular drive through the Newlands Valley on the way there, taking the road through Honister Pass on the way back. The former was lovely, and it was gratifying to see the latter – I sure as hell didn’t when I navigated my way through with 5m of visibility on the Coast to Coast Path in 2013! 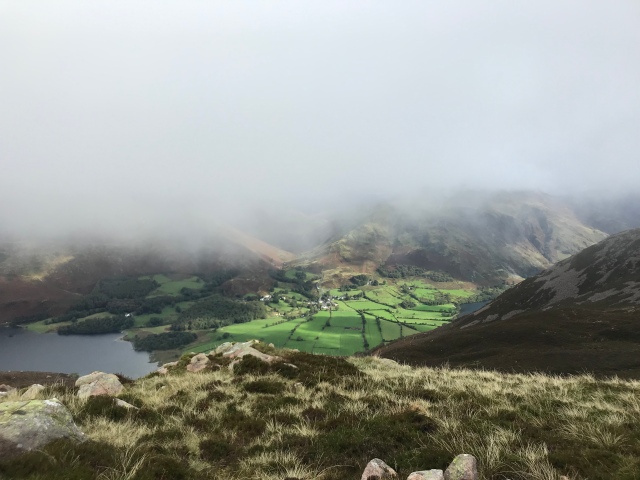 Peter’s route took us up to the 755m high Red Pike, which disappeared into mist as we got to the top, via Crummock Water, the thundering waters of Scale Force and along the beck that feeds it. 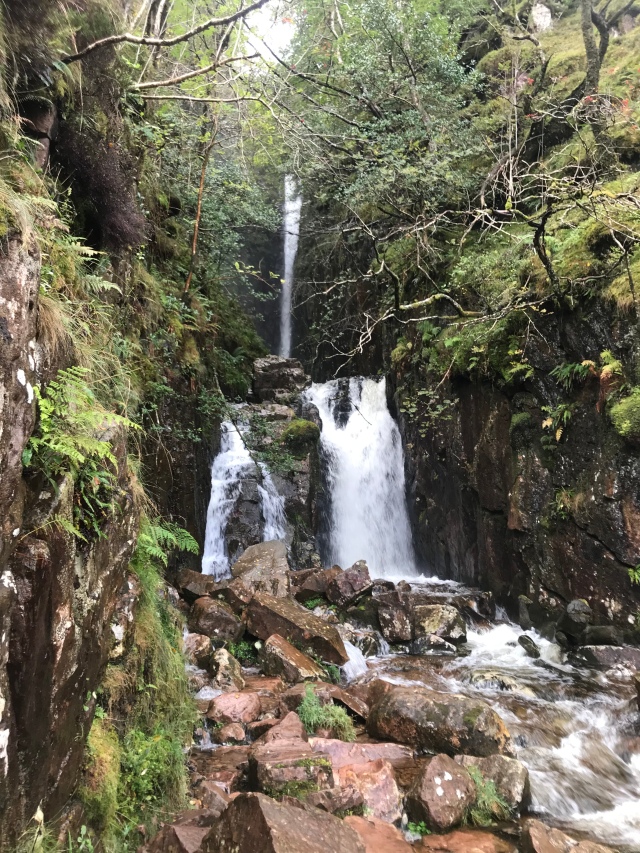 The way up was wet underfoot and challenging to negotiate – I know most of my friends would have been in mutinous mood had I walked them that way. But Peter was confident of his route and I was too far back for him to hear the occasional expletive that issued forth from my mouth. A bit of a steep pull up Lingcomb Edge got us to the top, the views disappearing more into the mist with every step we took. Low visibility and a chill wind had us heading back down the hill on what I will politely describe as a ‘somewhat steep’ ascent that took us past Bleaberry Tarn and the wonderfully named Sourmilk Gill, before taking the treacherously wet steps (henceforth known, to me, as the Devil’s Staircase – SO much worse than its namesake on the West Highland Way) down through Burtness Wood. Emerging from that stairway of terror, we reached the placid shores of Lake Buttermere where the sun-filled late afternoon was suddenly full of people dressed in full on walking kit… but who didn’t look as if they had walked much further than from the car to the cafe (she typed, bitterly). 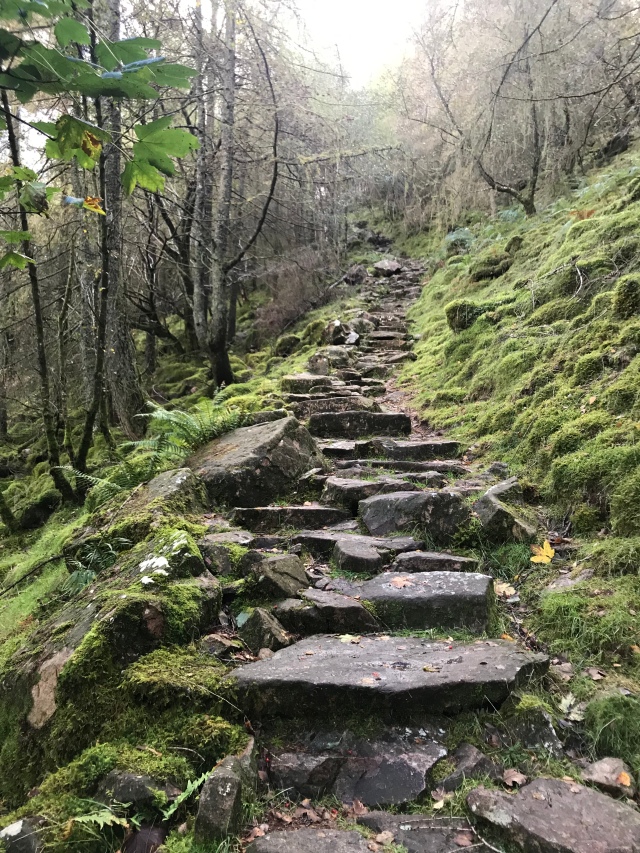 Neither day made for easy walking, but both were hugely satisfying. On the first day I’d asked Peter how far we were walking: he wisely said that with fell walking it’s about how long you’re out for, rather than the distance travelled. He was absolutely right – we only walked 6.5 miles on the first day and 9 miles on the second, but each mile was hard won, and worth so much more for it. And the scenery? Gorgeous. There’s an excellent reason the Lake District is so popular! 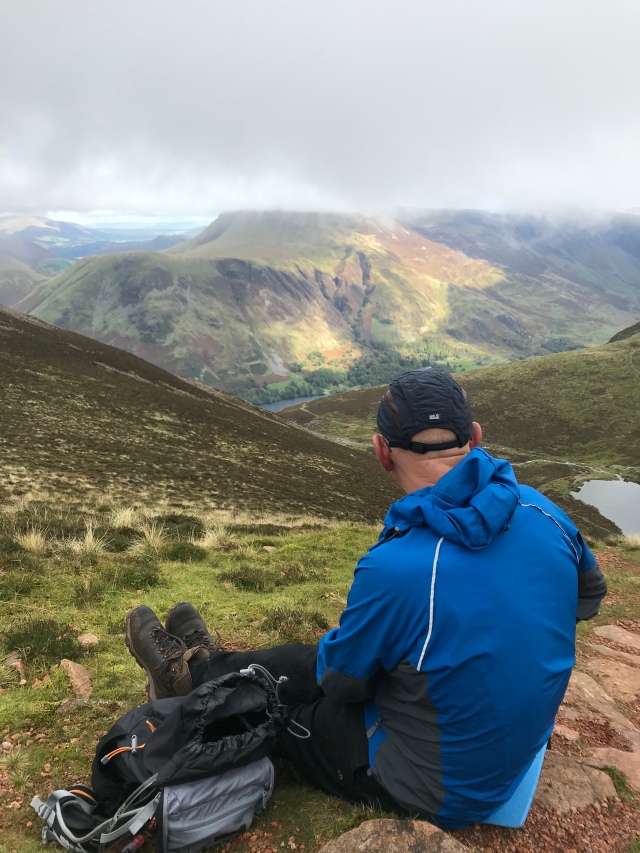 (Image: Peter – with, I think, Bleaberry Tarn in the background)

With huge thanks to Peter and his wife Pat for their hospitality – I had a wonderful – if somewhat wet at time! – weekend.

3 Responses to Two Days in the Lakes