I’ve spent the past few days falling deeply in love… with the greenest, most beautiful set of valleys and mountains that I’ve ever set foot in. It’s not been all smooth sailing; day two of our three day date proved challenging – in an ‘I almost cried because I was so tired / worried about coming back down the steep ascent I spent three hours struggling up’ kind of a way.

But the Drakensberg (which translates as ‘Mountain of the Dragons’) won my heart while reducing my usually fairly extensive vocabulary to a series of superlatives. It IS wow, and awesome, and amazing. It IS beautiful, magnificent and stunning. In my convoluted way, I’m saying that this is world class hiking.

Our route (led brilliantly by the ever-chilled Carlos, the guide, and accompanied by lovely South African father and daughter team Herman and Nicola, plus Sam, the porter) took us to Champagne Castle, one of the Drakensburg’s high points, which – at 3,377m – is some 2,000 metres higher than our starting point at Monks Cowl park entrance, and almost 1,000m higher than Keith Bush Camp, where we pitched the tents and wild camped for two nights.

Days one and three were a delight from start to finish, with easy walking and an incredible variety of wild landscape around each and every turn. Day two involved a steep up (and, later, down) that I found much harder than I had anticipated… and much harder than everyone else. Note to self: if you sit on your arse for a month instead of cycling to work and going to the gym a few times a week, this stuff is going to be harder. Additional note to self: rejoin gym as soon as I renounced my nomadic lifestyle of the past six months and get back to London! 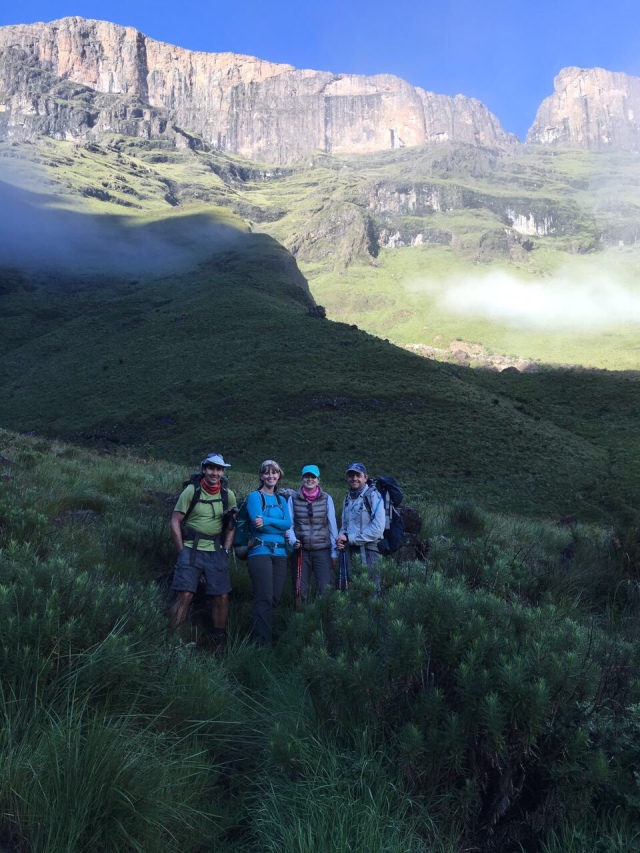 If you’re familiar with the area, we headed up past Breakfast Stream to Blind Man’s Corner and the Contour Path, wild camping overnight at Keith Bush Camp – with Monk’s Cowl and Cathkin Peak looming over us -before climbing up (And up. And up) the pass that took us to Champagne Castle. Coming back we took the same route until Blind Man’s Corner, where we headed down Keartland’s Pass, accompanied, for the final half hour or so, by a very impressive storm that wowed with its thunder cracks and lightening show while only dusting us in the lightest of rain showers.

If you fancy hiking in the Drakensberg (and, as I think you can tell, I rather liked it…), you’ll probably need a guide: once you get above 1,500m the paths are indistinct at best and are frequently non-existent. I can’t recommend Carlos enough. Check out the walks he offers at spanafrican-adventures.co.za… and have a wonderful walk 🙂 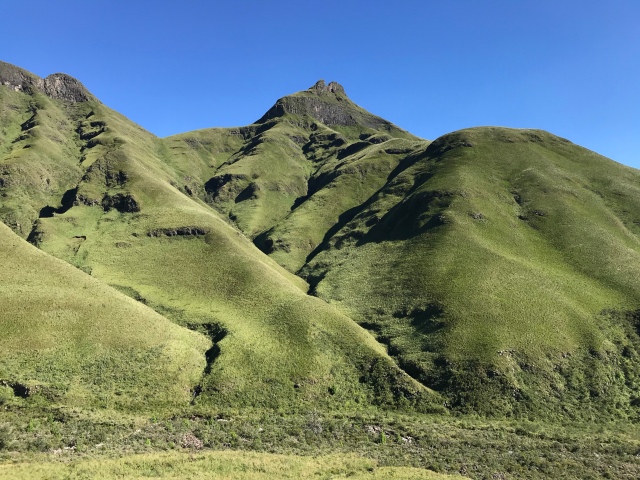