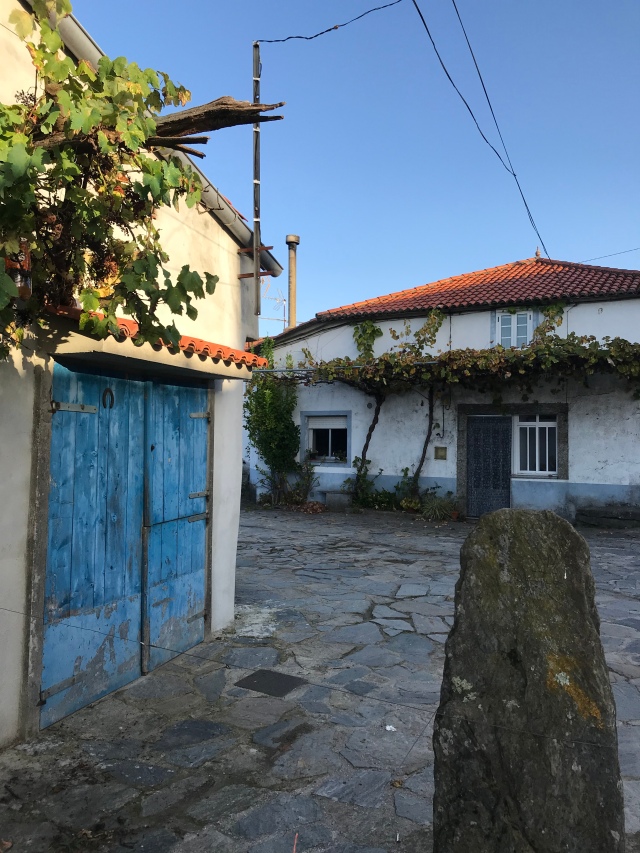 I walked quite a bit further than I intended to today. My mind kept on luring my feet into just walking another km or so. Then another… silly feet, they should have learnt by now. It does mean I’m only 21km away from my ‘finishing line’ at the Cathedral in Santiago de Compostela though. Despite the fact that I love walking and do a lot of it, it’s quite astonishing to look at the map of Spain and see how far they have carried me in just four weeks. Thank you (silly)feet.

Walking in Galicia has been outstanding – beautiful rolling countryside and tiny stone villages combined with (what I am told is) exceptionally fine weather and (what I know is) easy walking. Every day, I’ve offered mental thanks to all the landowners who planted the trees alongside many of the tiny lanes and farm tracks I’ve followed. Their sun-dappled respite from the heat has made walking in 25c every afternoon so much more pleasant. As have the many people who’ve set up tiny little cafes, many of them not mentioned in my guide, along the route. As the song didn’t quite go, ‘When the going gets tough, the tough need sugar’… usually provided in the form of an ice-cold lemonade. Or, in the early mornings, when a warm up has been in order, Cola-Cao – Spain’s apparent market leader in instant hot chocolate.

The funny thing about Galicia is that I know more people walk this bit, as the last 100km of the walk gets people some certificate thing that I’m not that bothered about. Yet despite that, I’ve been seeing less people ahead of me. I think it’s because, on the Meseta, you could see for miles in all directions. But since Astorga it’s been mainly winding woodland paths that swallow people up, as if by magic. I am anticipating tomorrow will be different: many of my fellow walkers are obsessed with making it to Santiago in time for the pilgrim mass at 12 noon, and my guidebook has warned of swathes of people, and how you need to be patient and stuff. I think I’ve got this: I’ve lived in London for 18 years and am preparing for Oxford Street at Christmas, except everyone will be wearing North Face instead of Miss Selfridge. Oh, and I won’t be allowed to tut. 🤣