I finished my 10 day, 186 mile walk today. Except it wasn’t actually that long – I’ve totted it all up and it came to 204 miles. Still, what’s an extra 18 miles / eight unexpected hours of walking between friends, hey (she asks, bitterly)?
Quibbling about numbers aside, the weather decided that, having already behaved impeccably for nine whole days (not one drop of rain while walking, and barely any wind. In Wales. Could it be unprecedented?), it would bring the sun out in full force. This has had a duel purpose: my end of trip photos showcase the wild ending to the Pembrokeshire Coast Path in its full glory… and the Rudolphien glow of my nose has been very effectively enhanced. Hence, no photo of me at the end – just the bag… which, unlike my face, was bright pink before the sun got to it!

(I am a shadow of my former self…)

We got all the way from Newport to Ceibwr Bay (the half way point) before we saw anyone today. And then, about 12 miles in there was a flurry – including a group of wetsuit-clad adventurers jumping from a pretty scary looking rock (some a lot more hesitantly than others) into the water just past the very beautiful ‘Witch’s Cauldron’ – a sea cave where the roof has collapsed. On we walked, continuing to climb and descend (and then climb again. And again) along the narrow cliff top paths, almost all situated on steep, wild, bracken covered slopes that lacked the generous coverage of spring flowers I’ve enjoyed so much on the rest of this walk. Soles of my feet feeling red hot, it was a relief to get to Cemaes Head and hit the road that took us past the glorious expanse of Poppit Sands to the official finish at St Dogmaels (and, more importantly, the two well earned – and quickly downed – pints of Peroni in the lovely Ferry Inn).

I’ve really enjoyed the Pembrokeshire Coast Path, and as I said above, I’ve been unbelievably lucky with the weather. But if it’s a relaxing holiday you’re after, I’d strongly advise you to consider taking longer than 10 days to walk it – there are a number of lovely villages and small towns that are worth an explore, and the locals I’ve stopped to pass the time of day with have been very welcoming. Most days I’ve started walking at 7am, finished around 6pm and almost without exception been asleep by 9pm. My trip was more about the physical challenge of walking my sixteenth British long distance trail (and my fourteenth National Trail) and switching off my brain from all the normal mental noise. It’s been helpful to see what has turned out to be important – the stuff I need to do or embrace or change – and as usual after a long walk, while my body could do with a bit of a rest, my mind is raring to go again. Watch out London, I’m heading home, and I’m recharged! 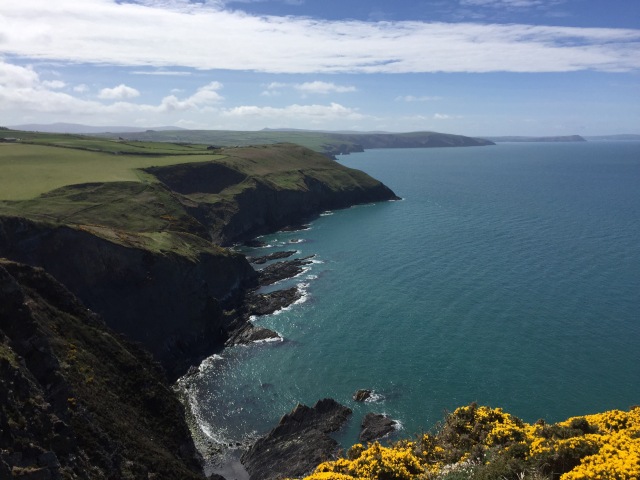