Today I drank my first £1 pint since the Hull University student union bar, circa 1995. Some walking related stuff also took place, but an event of this momentousness meant that I a) had to tell you about it straightaway and b) have a second pint before these knockdown priced leftovers from the bar’s recent beer festival ran out!

On with the walk, which was mercifully short after 10 days of walking and where I hadn’t slept much the night before (note to self: bars in small towns on Saturday nights are not the most restful place to stay – especially if they have music blasting away and a late licence…). It was different from anything we’ve experienced on the Pennine Way so far, so this isn’t a post about wild moorland or rolling pastures – it’s got a much more watery theme, all about the River Tees and the waterfalls on it.

As you will have told from my other posts, our walks on the Pennine Way have often turned into a bit of a social whirl, but today Annette and I walked alone; the first time since the morning of our second day! As it turned out, it would have been far too windy to converse with a group of people anyway; as we walked west along the River Tees, a headwind blew into our faces the whole way, making for quite a tiring walk considering the shortness of our day and that much of it was a riverside meander.

The River Tees expanded as the walk went on, changing from a pretty standard looking river, albeit one accompanied by bluebell strewn riverside paths, to a much faster flowing, wilder, quite magnificent creature at its end. It tumbles down an impressive waterfall at Low Force, but really comes into its own a couple of miles up river, where the 21 meter drop of the thundering High Force waterfall awards it the distinction of being what’s apparently the highest unbroken fall of water in the country. I’ll let the photos below tell their own story.

Have had a great stay at the Langdon Beck Hotel tonight, a small and simple place where none of the furniture or soft furnishings quite matches, but which is comfortable and welcoming. And of course, there’s the matter of those £1 pints…

Photos:  One of many bluebell filled fields / me at Low Force / High Force / The River Tees 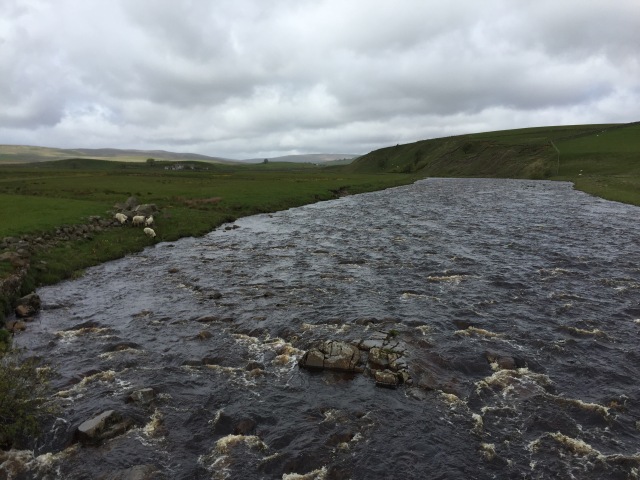