My day started by approaching a man I had never seen before over his breakfast and asking him if he was called ‘Pilgrim Chris’. Not only did he say he was, it’s happened to him before. I’d like to claim I’m psychic, but a Twitter pal @Acripedes had told me he knew of a fellow tweeter starting the Pennine Way at the same time, and I just had a hunch… So, another new friend made, and hopefully we’ll have shared a few pints and stories before this trip is over.

As for today’s walk? Pretty fabulous: and I’m not just saying that because I’m sitting in the sunshine outside The Carriage House Pub (where I’m staying tonight) and drinking a pint of local ale. For a start, we could actually see the landscape we were walking in today, and it was wild and beautiful, with rocky escarpments and picturesque streams galore. It didn’t rain, we had a good climb at the beginning to the craggy Laddow Rocks, it was warm enough to walk in a t-shirt for most of the day, and upon leaving Black Hill, we left Derbyshire behind for West Yorkshire, our second of the eight counties we’ll walk through on this trip. Progress!

We met Peter, a Peak District National Park Ranger (they are volunteers but get a badge and rather smart fleece – could be my retirement job?) at Black Hill who stopped to chat and told us all about his mission to spot the short eared owls that are supposed to be in the area while checking on how the paths across the moors are doing (answer, to my eyes, is pretty bloody good). We lunched on sarnies and crisps by the side of the Wessenden Head Reservoir, looking down onto Wessenden Reservoir (the afternoon of our walk had a definite Reservoir theme), and finished up just as Peter and Colin came by, so we walked the last few hours with them, nattering away as we went.

A great day of walking, followed by an excellent stay at The Carriage House in Standedge, which has great rooms, good beer and Turkish food, a cracking landlady, and a Saturday night karaoke night that will live LONG in my memory. Everytime I ever hear ‘Piano Man’ for the rest of my life, I will be transported back to that pub. I can assure you, it did not sound anything like this    http://open.spotify.com/track/3FCto7hnn1shUyZL42YgfO 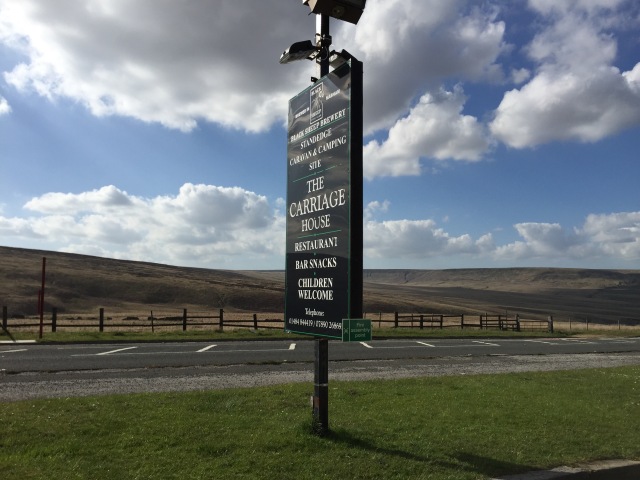