Date: Monday 26 May 2014
Walked from: Clwyd Gate, Wales
Walked to: Llangollen, Wales
Walked with: Annette, Stewart ‘with a W’ and Peter
Distance: 14 miles
Stayed: Hand Hotel, Llangollen
Weather: Dry! Even sunny for the first half of the day!

Today was one of the best days of walking I’ve ever had: varied scenery, nice temperature, no wind, no rain… just fantastic.

Annette and I set off from Clwyd Gate at 9am, after a half an hour taxi ride from Llangollen. It took us a bit longer than that to walk back, but at least we didn’t have to pay £30 this time! The first half of today’s walk took us across the southern half of the Clwydian Hills, with equally as pretty patchwork field vistas but not as much physical effort as was required for the hills in the northern half yesterday.

Water meadows led us into the village of Llandegla, where I bought a chocolate bar from the honesty box in the local church and a bottle of lemonade from the local shop. After stopping a while on a bench in town to enjoy the sunshine and listen to the bank holiday whir of strimmers and law mowers it was onwards – and upwards – through the dense forest of Llandegla Forest. Having navigated our way through (and with me picking up an unexplained knee injury on the way) we emerged from the forest to discover the landscape had totally changed from one of rolling hills to haunting, moody moorland. With tree stumps a plenty to perch on, it seemed like a good time to eat lunch – a Spar sarnie for Annette, a scotch egg and pickled onion Monster Munch for me (we know how to enjoy ourselves on holiday…). And who should come along five minutes later but Stewart and Peter from Penrith, who we first saw in our hotel the morning we began our walk and who we talked to in the pub on the first night. Interesting chaps that they were, we walked the rest of the day with them across the moorland, passing a beautiful looking manor house at World’s End and on past the scree slopes under the starkly beautiful Eglwyseg Crags (where some mountain bikers passed us on a very narrow footpath with a vertiginous drop. I like cycling but they shouldn’t have been there: it was dangerous for all concerned).

The walk ended under the shadow of the hill topped ruin of Castell Dina’s Bran, the remains of a medieval castle on a conical hill, with a long downhill trot back into Llangollen. Another dinner, probably a little more boozy than it should have been back at the fantastic Corn Mill restaurant followed, with both our walking companions from today and Compeed Andrew, who also ended up in town that night. 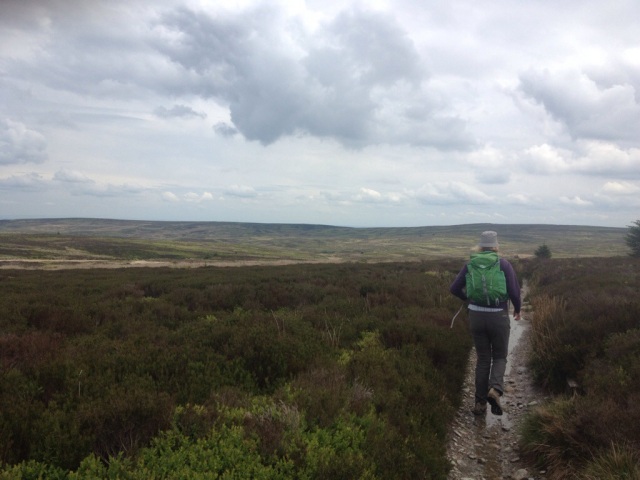