When – 15 May 2013
Where – Osmotherley to Clay Bank Top
Distance – 13.5 miles
Walking with – Annette, and later on Dr Dave and Original Steve
Home for the night – Newlands House B&B, Great Broughton
Weather – Absolutely pissed it down. Mist. Wind. You get the picture.

Today could, even should, have been a whole lot worse than it was. As I starred out of my hostel window at the pouring down rain I lamented my failure to bring my waterproof trousers with me and consigned myself to the fact that I was going to be wet and cold all day.

And then a miracle happened – Annette met me by the start of the walk with a pair of waterproof trousers! Given to her, to pass on to me, by Steve the photographer! AMAZING! My day picked up right then and there. Then Annette told me she’d seen our two original Coast to Coast walking buddies, Dr Dave and Original Steve (so named because he was the first in the long-line of Steves we’ve encountered on our cross country trip) in the village and that we were all headed to the same place tonight. Fab! We thought we’d lost all our C2C buddies after saying goodbye to the Gang of 15, but no, there were the first two people we’d met and walked with on the very first day, a week after we’d last seen them in Shap.

Quickly pulling on the best present in the world ever (AKA the magically appearing waterproof over trousers), we set off into the rain and mist back up the hill to Arncliffe Wood. I won’t bore you with lengthy descriptions of the beautiful Scarth Wood Moor, the forest we walked through or Huthwaite Green. Because we couldn’t sodding see anything. You’ll note, in fact, that all the pictures below (taken when the rain abated enough to risk getting my iPhone out for a second) have a certain, um, ‘misty’ quality to them.

On the steady climb up to Live Moor we spotted two familiar looking backpacks on the backs of two equally rain-sodden walkers ahead of us – Dr Dave & Original Steve. Hurrah! Misery may love company but so does One Woman and Her Maps, and the waterproof trousers meant that I was actually in a pretty good mood – despite a nagging ache in my left shin that I am continuing to be very brave about.

Together the four of us walked the largely flagstone-like paved route across Live Moor and Carlton Moor, pausing occasionally at what was supposed to be a great view point to giggle and make ironic comments as we peered into the mist and cloud that surrounded us. ‘Great views east and north to Middlesbrough and the North Sea’ promised the Coast to Coast path Trailerblazer Guide. ‘Not sodding likely’ proclaimed we, as the rain and cold wind continued its assault on our sanity.

Even the building site where a cafe used to be (Lord Stones Cafe is no more, Coast to Coasters) couldn’t dampen my spirits, and teamwork meant we did eventually locate the path behind the pile of sand and dirt the builders were obviously trying to put us off track with. The climb up to Kirby Bank was a great way of warming up a bit, and I’m kind of glad we couldn’t see down as the glimpses I got from the edge seemed to suggest a pretty vertiginous drop…

A steep descent and a bit of a climb later and we were at the Wain Stones, a striking looking outcrop of rocks you’ll see in one of the photos below. What you won’t see in the picture is the four of us going slightly off-track trying to find our way around the stones and doing a bit of scrambling on a very narrow path. Or the startled look on the faces of the group of schoolchildren who were suddenly confronted with Steve emerging from the mist, seemingly from nowhere, shouting ‘Here’s the path’…

A short walk along Hasty Bank, another steep climb down and we’d reached our destination for the day: Clay Bank Tops. Dr Dave & Original Steve were being picked up from there, but despite their best efforts couldn’t persuade their B&B to give us a lift too, so Annette and I hot-footed it the 2.5 miles downhill into Great Broughton where we were staying. A blissfully hot shower and change into (all) my dry clothes later, and we headed to the local pub where I managed to drink four pints without them really touching the sides, have dinner and meet the two maddest Coast-to-Coasters of our trip, Andy and Yogi. They are walking the C2C in seven bonkers days, carrying 25k rucksacks (they say – I tried to pick one up and think it was heavier) with them as they go. Impressive? Insane? Both. Clearly they are both ridiculously fit, but, from the number of times they’ve got lost, I’d also say they are crap at map reading. They reckon they may have walked 300 miles instead of 200 by the time they get to Robin Hoods Bay. Sounds about right! It’s not just the places making this trip, it’s also the people, and we’ve been meeting some brilliantly bonkers ones.

Photos from top to bottom: the wood climbing back out of Osmotherley, Annette emerging from the mist, Original Steve and Annette walking towards the Wain Stones, Original Steve looking on in bemusement at one of the many fire risk posters we encountered on the walk 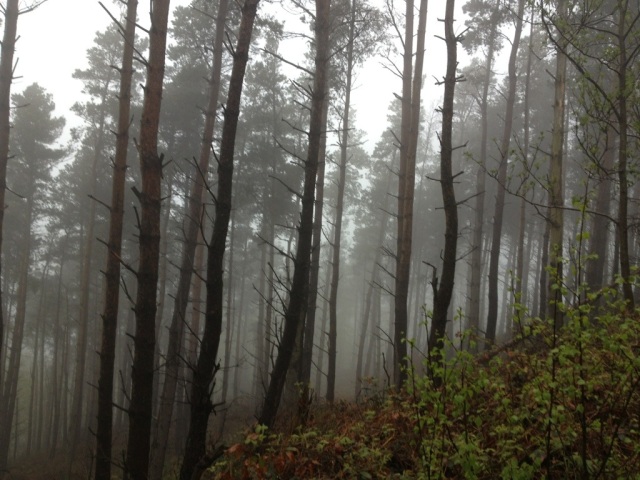 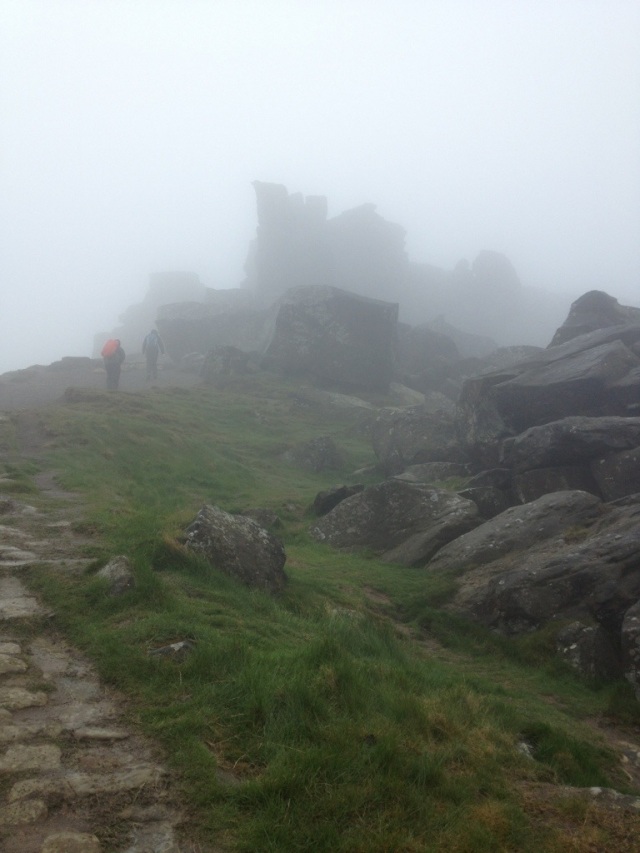 I'm a map addict. I nip out in my lunch break to go to the National Map Centre, just around the corner from where I work, to feed my habit. My fix normally costs £7.99 and comes in the form of an OS map, although I'm a big fan of Sustrans cycle maps, the Trailblazer walking guides and maps of the world too. And once I've got my new map, I start plotting - routes, adventures and an escape away from the office that I spend too much time in. Maps, quite simply, make the world a better and more exciting place.
View all posts by silkakt →
This entry was posted in Uncategorized and tagged Clay Bank Tops, Coast to Coast walk, Wainwright's Way. Bookmark the permalink.