When – 9 May 2013
Where – Shap to Kirkby Stephen
Distance – 20.5 miles
Walking with – Annette
Home for the night – Kirkby Stephen Hostel
Weather – It did that cold wind, lots of rain, soggy boots thing. Again.

My guidebook described today’s walk at a 20.5 mile ‘recovery’ walk. How on earth is a walk that takes seven hours supposed to help you recover from anything, I wonder?

Actually, the walk itself was a very pretty flat / gently undulating hike over a series of fells, and would have been really enjoyable if it hadn’t been for the rain. And the wind. In fact, I’ve a lovely colour from the walk today – but that’s windburn for you.

At least we could see today: helps a lot when you’re navigating, and for the first three hours of today’s walk I was acutely aware that there were about 20 walkers in the distance behind me, most of whom would probably have been automatically following where I was going rather than checking their own maps. I didn’t want that kind of responsibility – I’m on my holibobs! Bad enough if I get Annette and I lost, let alone everyone else…

We started today by crossing two of the north west’s major transport links – the West Coast Mainline and the picturesque M6 Motorway. And then it was back to being in a timeless landscape of wide open spaces. We passed a lot of sections of so-called limestone ‘pavements’ during the first half of today’s walk, mainly on Crosby Ravensworth Fell, and didn’t bother to search for a couple of stone circles Julia Bradbury apparently spent sometime looking for when she filmed a TV series on walking the Coast to Coast a few years ago.

A welcome stop at a tea tent (very well secured to the ground, otherwise it would most certainly have blown away) in the garden of Scar Side Farm near Orton meant time to for a warming hot chocolate and teacake as well as that rarest of things en-route – a toilet! Also it meant some other walkers overtook us, and I was no longer in the lead. And we had a chat with Jules and Steve (Another Steve – but of course) who we first encountered at a similar tea and cake stop on our first day.

Heading off we fell in to walking with the big group of 15 (although their numbers were down to 13 today due to injury) we keep meeting for a while, as we made our way across Orton Scar. There are some lovely people in the group (the men aren’t all called Steve. Some of them are also called Geoff. And the women have a wide variety of names) but because they have to stay walking together they end up being a bit too slow for us on days like today, when the rain drives you on to finish so you can be warm and dry again!

The rain had been playing with us a bit until that point, but by Tarn Moor it was really going for it, so I’ve no pictures to share with you of the second half of the day. A shame, as Sunbiggin Tarn was rather pretty, as was Ravenstonedale Moor – where we stopped briefly for a late lunch, surrounded by sheep, up against the shelter of a drystone wall near a hill top water cistern.

The final post-lunch walk was a real slog because of the weather: sad, as it was a very pretty area. The bridge over Scandal Beck was picture postcard perfect, and the Smardale Gill Viaduct was really impressive – those Victorians knew how to build stuff!

Around the point of Smardale Fell we started singing songs about sunshine in an effort to cheer ourselves up. It did help but I think surprised the couple who were sheltering from the rain in a tunnel under the railway line…

Sodden and cold, it was a huge relief to get to the hostel. Only to discover that it didn’t open until 5pm – we had an hour to kill! Demoralised, we headed to the nearest pub to wait it out. To be honest, pubs have been featuring somewhat more in the evenings than I may have mentioned, but then this is a blog about walking, not drinking – and I’m usually tucked up bed by 10pm anyway! 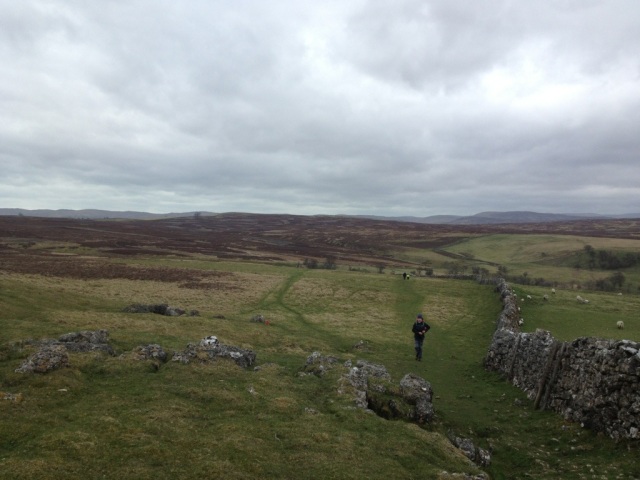 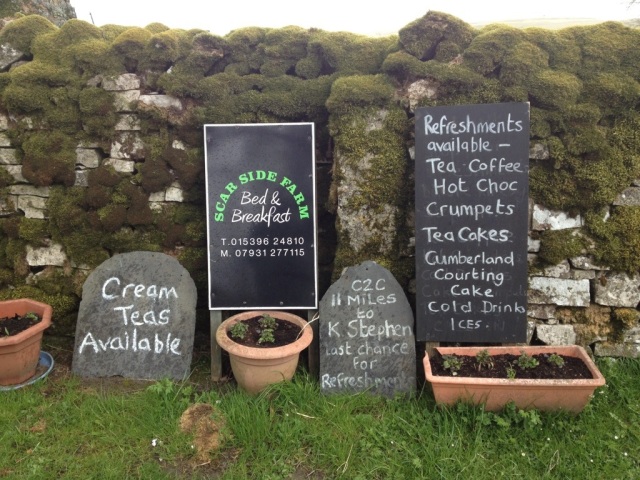 I love to explore countries on foot or by bicycle. An English woman, I moved to the south of Spain in September 2020 and I have dreams of encouraging more people to discover this amazing country by walking its various Camino routes. To date, I've walked the French Camino from St Jean in France, the Portuguese Camino from Lisbon (interior route, not coastal) and the Camino Primitivo from Oviedo. I have also walked a fair few long distance trails in the UK, including all of the National Trails in England and Wales, and a couple of long walks in beautiful Scotland.
View all posts by silkakt →
This entry was posted in Uncategorized and tagged Coast to Coast, Crosby Ravensworth Fell, Kirkby Stephen, Orton Scar, Ravenstonedale Moor, Smardale Bridge, Smardale Fell, Smardale Gill Viaduct, Sunbiggin Tarn, Tarn Moor, Wainwright's Way, walking. Bookmark the permalink.