I had the waterproofs and the midge repellent ready, but it didn’t occur to me that I might need sunscreen on the West Highland Way! We had a fantastic day’s walk today, from the start of the national trail in the attractive commuter town of Milngavie all the way to Balmaha, some 20 miles later, and most of it was accompanied by sunshine! Who would have thought it!

The tourism office in Milngavie were impressively proactive – they had a nice lady out on the street offering to take photos by the obelisk that marks the start of the Way, and when she said you could get a walking passport to stamp along the way… with a certificate at the end… well it was all too exciting for words – I paid my £5 and got my passport!

We didn’t start until 9.45, which felt a tad late for such a long walk, but an easy first 12 miles and the energy of the first day meant we were done by 5.30 this evening.

The first few miles out of Milngavie were easy and pretty enough – a saunter through Allander Park and Mugdock Wood, and then we hit our first Lochs; Craigallian and Carbeth Lochs, and the very pretty backdrop to the striking Dumgoyach wooded knoll. The next four miles was easy walking through farmland along an old railway track which last saw a train run down it in the early 1950s – and there was me thinking it was Beeching who got rid of all the train stations! We also passed the Glengoyne whisky distillery  http://www.glengoyne.com but we were way too early into the week long walk to be popping in there…

More walking in parallel with the noisy A81 and we passed through Gartness, a pretty little hamlet that had a step up from one of the usual honesty boxes – it had an honesty fridge and an honesty freezer. I didn’t WANT any chocolate you understand, but it was impossible not to buy that Milkyway!

The section of the walk between Drymen and Balhama was one of the the most – maybe the most – beautiful and spectacular walk I’ve ever done. A lovely and easy walk through the very pretty Forestry Commision-run Garadhban Forest gave way to stunning views of the south of Loch Lomond, Conic Hill and the striking open moorland to the right of Conic Hill –  http://www.walkhighlands.co.uk/lochlomond/conic-hill.shtml eight miles of walking heaven and a pretty easy climb up, followed by a much tougher and steeper walk down.

And then – hurrah! – the Oak Tree Inn http://www.oak-tree-inn.co.uk where we’re staying tonight appeared, as if by magic. If you’re ever walking the West Highland Way then seriously consider staying here – lovely rooms and some delicious food. The only down side was the the noisy people who woke me up when they came in at 1.45 in the morning… 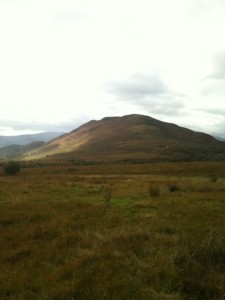 4 Responses to The West Highland Way, Day One (trailblazer guide)